Anybody who’s ever visited the Cat Guardians Shelter since its grand opening in August 1991 knows who “Stosh” is! Considered the shelter mascot, “Stosh” was the people-friendliest cat in residence. His numerous health ailments were the reason this gregarious fellow was never lucky enough to be adopted, but that meant it was lucky for Cat Guardians because he became the heart & soul of the shelter!

This spunky guy even defied he medical lab results when he outlived his cancer diagnosis by four years, living to the respectful age of 22! He was acting like his usual self until the end, jumping on the sink, insisting on being first at the food dish & water bowls! He went upstairs with Kathy for the last couple of days and died peacefully in her arms.

“Stosh” was a very important part of the shelter and we’ll always remember him greeting us at the door, running into the medical room & generally acting like he was the King of the place – which he was. We’re glad he got to spend so much time with Cat Guardians. 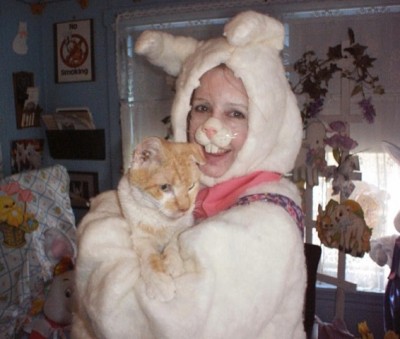