Ragdoll was a special girl who came to us in poor circumstances. When first brought to the shelter, she was suffering from mange, as well as other conditions that caused her grief. Although she was successfully treated for her mange, she was left with scarring in her skin, that gave her a rough coat. But that didn’t bother her–she still loved to be rubbed, and she adored being around people.
Eventually, though, other conditions caused her to need to have both eyes surgically removed. At that point, she became Kathy’s cat. Originally, when she came to the shelter, she was given the name Miss Fang, owing to that she only had one eye-tooth.  But when she was adopted, she was renamed Ragdoll, both reflecting her life and Kathy’s love of the Four Seasons song of the same name.

She was a favorite of Kathy’s, and she was given a loving home where she could learn to adapt to her new life as a blind cat. She lived this way for nearly two years, but ultimately, she succumbed to age, and health issues. But she was a well-loved cat, and will be missed by everyone who knew her. 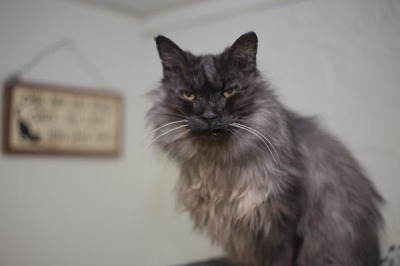