Paris was a little gray tiger girl, first discovered on August 31, 1997, along with London and France. She lived at the shelter for six years, before being adopted by a friend of the founder. Although initially very shy, she overcame her fears, and became a loving member of her family. She was fond of sitting on laps, curling up in cardboard boxes, and chasing her sister, Kitten. She was a major fan of Feta cheese, corn, shaved turkey, Reddi Whip, and watermelon. As she neared the end of her life, she became a fixture on her little pillow on the kitchen island, always ready to share a snack. She passed on March 23, 2013 with her family by her side. 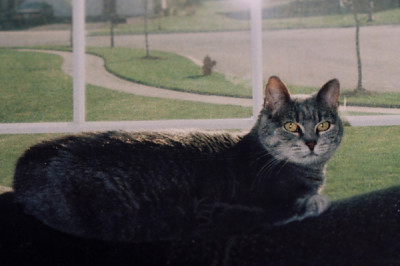