Tippy is seeking a new, forever home, as his owner is moving into a retirement community in Florida, and won’t be able to take them.

Tippy black/white, female DSH was born on 5/08/2007. She was a feral baby and was raised as an ‘inside’ only cat in a multiple cat setting. We took her in at about 2 months of age.

Tippy loves to chase the others and give them a good workout. Sometimes she just tries to aggravate the others so they’ll play. Tippy has become vocal about wanting attention and is a definite lap kitty. She’ll also let me hold her and just love on her. Although Tippy will play & chase the others, she is mostly a loner who likes to hide out in my bed for a nap and the night. Tippy enjoy the laser and da bird type toys.

Tippy has a problem with her urinary tract on occasion and it is cleared up with antibiotics. The last time was in March 2013. She was seen at Dundee Animal Hospital. Tippy weighs about 11 1/2 pounds. She eats Royal Canin Urinary SO for felines . She doesn’t like kitty cookies/treats but will have a little bit of real chicken when I’m eating some. Tippy eats about a rounded teaspoon of wet food for breakfast and then dry food the rest of the day.

Tippy can be a bit shy, but warms up to people rather quickly.

Tippy’s only real behavioral issue is that she doesn’t want anyone touching her paws so nail clipping happens infrequently. If you mess with her paws, she may lightly try to nip or paw but has never bitten anyone. I usually have her nails clipped by the vet because it takes a few techs to hold her down.

Tippy always uses the litter box so there are no problems with this.

She has not been exposed to children or dogs, so I can’t comment on possible behavior issues.

Tippy will play with other cats, playing chase me, for the most part. She can be quite the loner except when she wants human interaction. Then she’s a lover. She sleeps with me most nights right by my pillow.

Tippy was spayed at around 3 months old at Dundee Animal Hospital. She is current with her shots and I have documentation on all vaccinations and medical records. 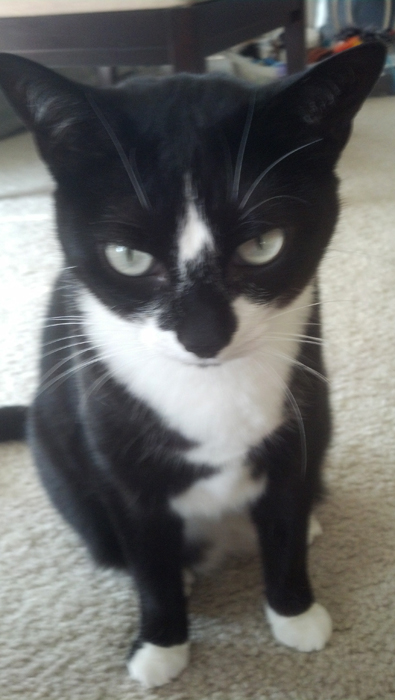