Sonny is a sweet but independent kitty. He seeks attention/affection but his terms. Probably would do best with someone that understands his personality, giving him both space and snuggle time when he wants it. He loves to be hand fed turkey. He occasionally plays with the laser light, but is not as aggressive as other kitties. He was very timid at first, but has come around quite bit, although he can still be a bit apprehensive at times.

2017-01-07: Sadly, Mr Sonny passed away recently due to complications of an undetected heart condition, exacerbated by anesthesia medication given during dental surgery.  He did pass peacefully. 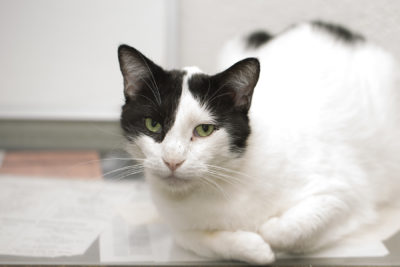