AJ is seeking a new, forever home, as his owner is moving into a retirement community in Florida, and won’t be able to take them. AJ and Silver are bonded, and hoping to find a home together.

AJ is a grey, male DSH and weighs about 14 pounds. He isn’t fat, just a large cat. His birthday is May 27, 2009. He was a feral baby and I brought him in at two weeks old and raised him. His mother had another sick baby in her small litter and wasn’t taking care of him. He has always been an ‘indoor only’ cat.

AJ would play all day if he could. He chases birds on sticks, other wand toys, and he has little plastic loops and cat nip fluffy balls that he chases during the day. He also plays with hard plastic wrappers like those you’d snip off of a vitamin bottle. He must love the crunch. He also loves finger wrestling with me.

AJ doesn’t eat wet cat food or feline cookies/treats at all. He doesn’t like them. When the others are eating in the morning, I sometimes give him a few small pieces of sliced ham or turkey. He used to eat tuna but he seemed to throw up often so I quit giving it to him. He eats Royal Canin Dry for Finicky Cats in the bright pink bag available at pet stores. When he had his Dr. visit last month, it was suggested that he eat a dental formula mixed in his usual food, so I purchased Hills Prescription Diet T/D for dental health but I didn’t make that addition as yet. AJ was found to have a bit of gingivitis toward the rear teeth (upper and lower).

AJ always seems to be awake and around so I don’t think he does the normal sleeping 18 hours a day that I’ve read about. AJ makes it to the top of the kitchen cabinets for his nap sometimes.

AJ is quite bonded with his cousin, Silver, who was raised by me from birth as well.

Answers to intake questions not previously mentioned above:

Tested for FIV and negative.

AJ has no specific behavioral issues. He’s not one to growl or hiss. His play can be a little harder with some cats that are noticeably smaller than him at times. He doesn’t know he’s as big as he is.

AJ always uses the litter box. No problems with this.

AJ has not been exposed to dogs or children at all. He has lived in a multiple cat environment and gets along fine with other cats.

When I finger wrestle with AJ, he sometimes puts his teeth on me but doesn’t bite. We just play a bit hard at this. AJ has never bitten me or anyone else.

AJ is shy when he is unfamiliar with people. He comes out in his time. Once acquainted with new people, he will approach them, especially for belly rubs. He is not a lap kitty, but will occasionally crawl on my lap when he feels the need for additional attention.

AJ has ‘not’ been declawed. He does, however, allow me to trim his nails – usually two paws at a sitting.

AJ was neutered at 3 months of age at Dundee Animal Hospital. That’s been my vet of choice for all my animals. Within the past couple of months, he received his updated vaccinations. I have certifications and receipts for all his medical care.
He has no medical issues. He can sometimes eat too fast and throw up occasionally, but it isn’t a daily occurrence. 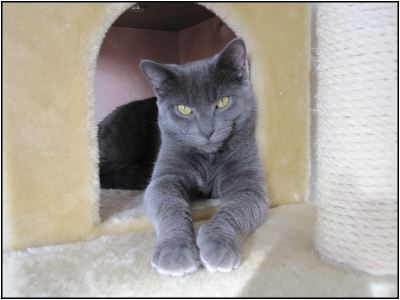